The documentation you are viewing is for Dapr v0.11 which is an older version of Dapr. For up-to-date documentation, see the latest version.

It’s common for applications to store sensitive information such as connection strings, keys and tokens that are used to authenticate with databases, services and external systems in secrets by using a dedicated secret store.

Usually this involves setting up a secret store such as Azure Key Vault, Hashicorp Vault and others and storing the application level secrets there. To access these secret stores, the application needs to import the secret store SDK, and use it to access the secrets. This may require a fair amount of boilerplate code that is not related to the actual business domain of the app, and so becomes an even greater challenge in multi-cloud scenarios where different vendor specific secret stores may be used.

To make it easier for developers everywhere to consume application secrets, Dapr has a dedicated secrets building block API that allows developers to get secrets from a secret store.

Setting up a secret store

Using secrets in your application

For example, the diagram below shows an application requesting the secret called “mysecret” from a secret store called “vault” from a configured cloud secret store. 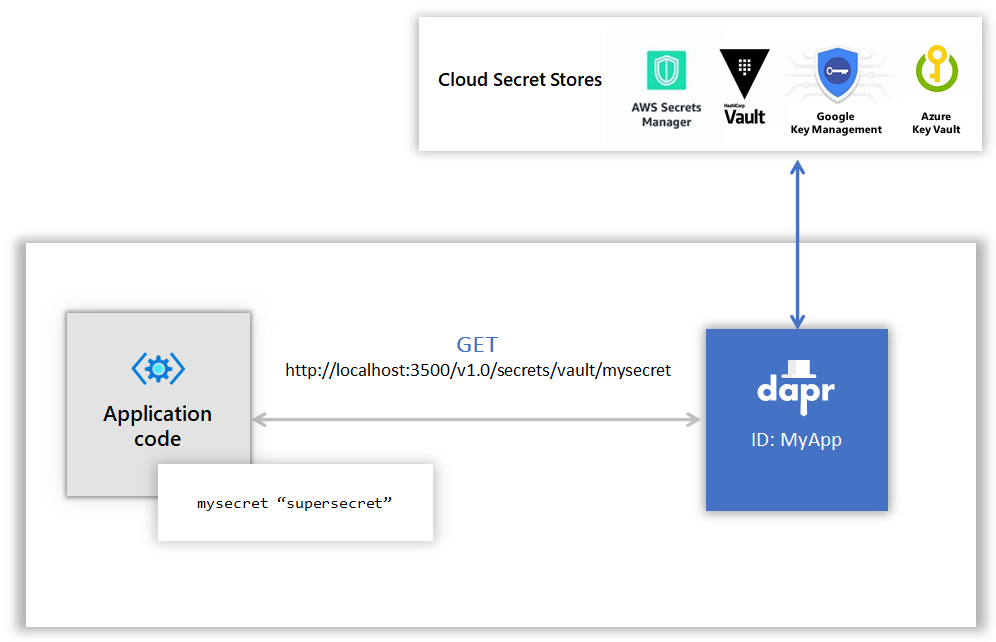 In Azure Dapr can be configured to use Managed Identities to authenticate with Azure Key Vault in order to retrieve secrets. In the example below, an Azure Kubernetes Service (AKS) cluster is configured to use managed identities. Then Dapr uses pod identities to retrieve secrets from Azure Key Vault on behalf of the application.

Notice that in all of the examples above the application code did not have to change to get the same secret. Dapr did all the heavy lifting here via the secrets building block API and using the secret components.

See Access Application Secrets using the Secrets API for a How To guide to use secrets in your application.

When configuring Dapr components such as state stores it is often required to include credentials in components files. Instead of doing that, you can place the credentials within a Dapr supported secret store and reference the secret within the Dapr component. This is preferred approach and is a recommended best practice especially in production environments.